For newbies who've never taken stained glass classes before, it's obviously hard to picture how much the grinder can help when first learning to cut glass.

We go through the steps of glass cutting while being told to cut on the lines (or just inside your lines, depending on how you prep for cutting,) and we’re told that the extra little bits of glass that didn’t come off while scoring and breaking can be taken care of on the grinder.

​This is a good thing, right?

So, the newbie gets set up on the grinder feeling slightly discouraged with their project next to them and they start grinding one piece at a time. And suddenly, they’re feeling pretty good. This is because they realize that they can correct all of the mistakes they​ made while cutting. ​

For the most part, the grinder may appear to be the perfect solution. 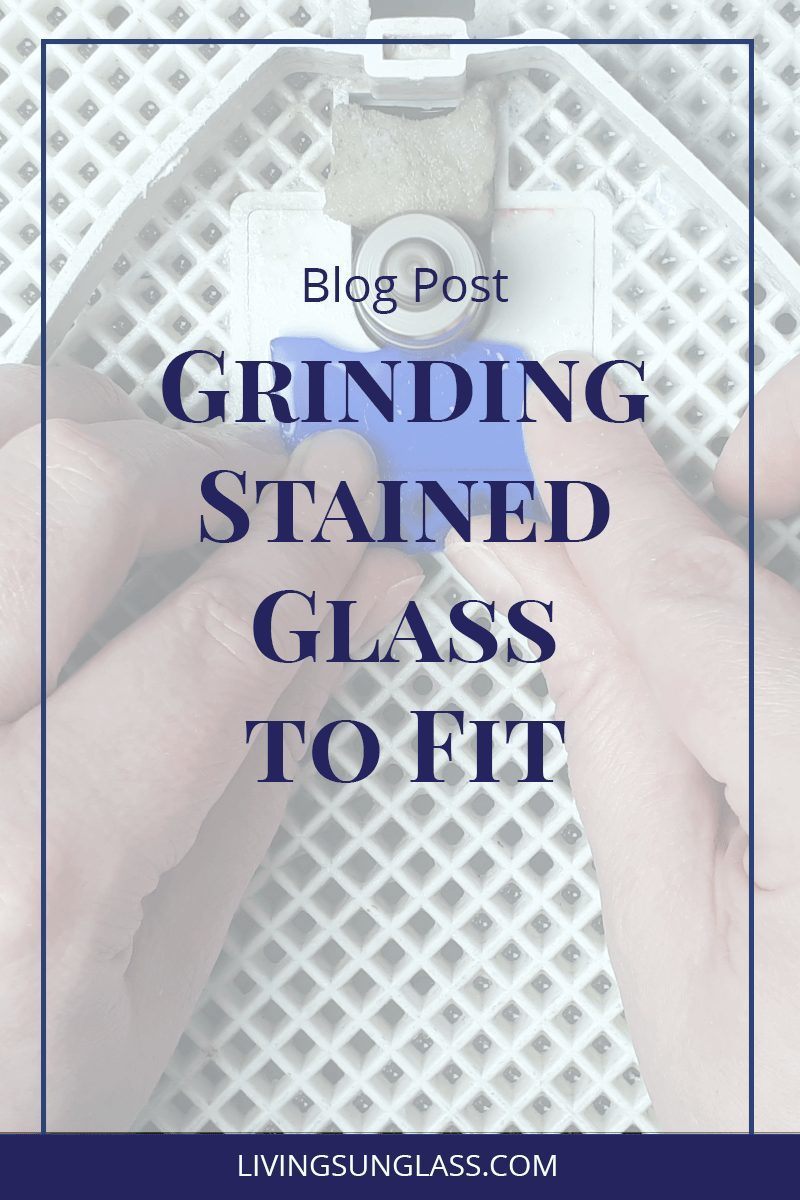 We all know that feeling of dread being lifted as we grind away the problem areas and see the pieces start fitting together.

But there’s a downside to this for newbies too.

By seeing how quickly the excess glass can be removed on the grinder, the feeling of needing to cut precisely, diminishes. This can happen for experienced crafters too.

So where does one draw the line? ​

How much is too much to grind?

As with many things in this hobby, experience and practice will guide you but you have to be vigilant. Over time, you’ll gain the ability to see while you're cutting glass what will be acceptable to you for grinding or not.

If your cutting skills aren’t that fantastic, you will spend more time at the grinder.

​When you have lots of extra little bumps, you are definitely going to spend more time at the grinder.

​Being too shy when cutting the glass and feeling the urge to cut away from the line because you’re afraid of breaking into the good piece of glass, ​is going to​ cause you to spend a HECK of a lot of time at the grinder!

Decreasing your time at the grinder

So what can you do to decrease the amount of time you spend grinding glass?

Well the answer to this question lies in part with where you are in the learning curve of knowledge and experience with glass, because some of us will have more room for improvement than others.

Even if you're new to glass cutting, push yourself to cut on the line where you can.

​I've had the occasional student over the years that developed a bad habit after taking their initial course and working on their own from home for a while.They came to the studio for a refresher course and I noticed that they were intentionally cutting each piece of glass just a little bit bigger than the pattern pieces were.

When I asked the reason why they were doing it this way, they explained to me how when they were working at home, they always cut them out like this. This way, they could make them perfect on the grinder.

So I had them proceed with making the first few pieces a bit on the large side since that's what they were used to doing, and then persuaded them to try cutting the balance of the pieces on the line.

They admitted that it was their nervousness in cutting glass that initially caused them to start scoring a little bit further away from the line because they knew that the grinding step was next, and they could fix anything they wanted to.

The pieces that were cut within their “comfort zone” were cut much too large. And by much too large, we're talking about 3 millimeters all along the edges.

Now if you're new to working with stained glass, this probably doesn't seem like a whole lot of extra glass. But experienced crafters know that just because something can be corrected on the grinder, it doesn't mean it's the most efficient way to get the job done.

It would take so much more time to grind all of the large pieces compared to simply touching up and doing a quick grind around a more appropriate sized piece of glass. Imagine how much time it would take to grind 3mm off every piece of glass in a 50 piece pattern. It would be overwhelming!

When thinking about the grinding step, it should be viewed as a process for refining shapes but should by no means be considered a way to create every shape you need to make a project.

Lesson the number of breaks

Another thing you can do to decrease the time you spend at the grinder is to cut the glass with the fewest, most fluid movements as you can. Every place that two cuts meet will potentially create a little bump or “​blip” as I call them.  Now these little ​blips are places you really need to pay attention while running the glass across the grinder. The less ​blips, the less time you need to grind the glass. 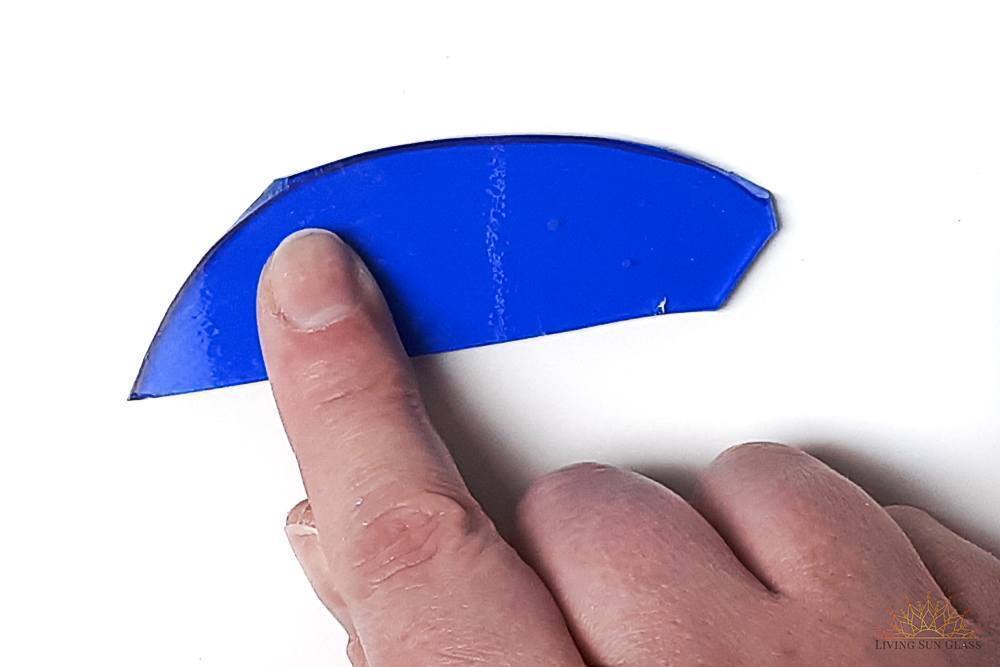 Now instead of starting at a corner and sliding the whole length of the glass along the grinding bit, focus on just taking off th​e bump. Then you can easily take the piece of glass and grind it from edge to edge​ without hitting a ​blip. Going side to side across a blip would likely cause you to dig in just a little bit on either side of it​ because you bounced off the grinding bit when you hit the bump.

​Focus on your glass cutting

Thirdly, spending more time practicing cutting glass can up your game considerably. If you can improve your cutting by 5%, then that translates into at LEAST 5% less time you need to spend on the grinder. Most likely, it will result in much more time saved at the grinder. That's because all of your pieces are more precise and therefore already fit much better than before.

So here’s a little exercise you can use as practice to deal with little ​blips and bumps along the glass edges.

Start by first grinding a groove into the edge of a piece of scrap glass. 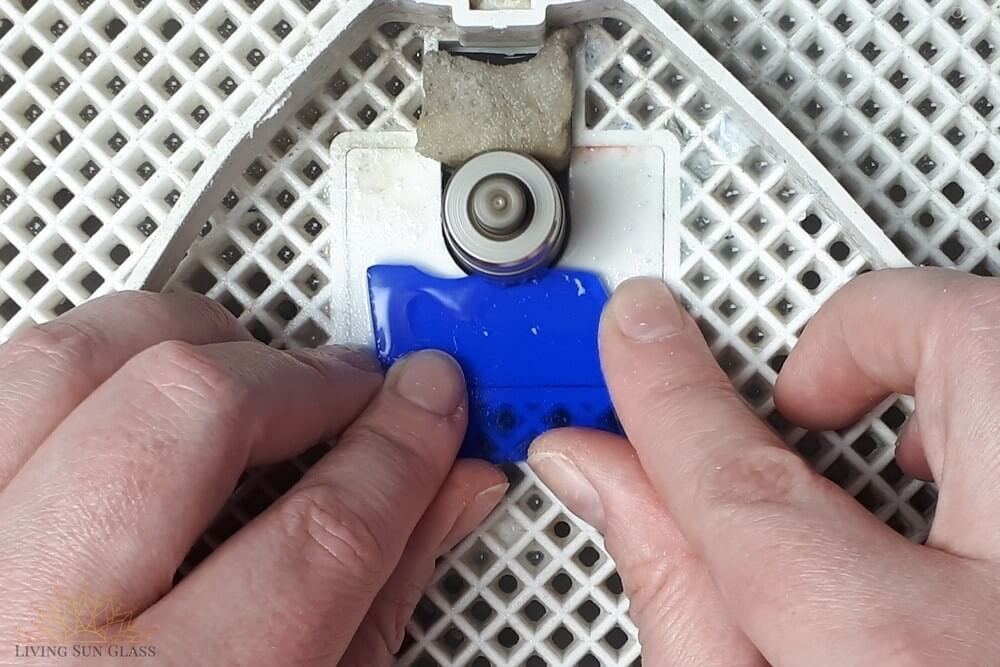 ​Then add a second groove beside the first to create a peak in between the two grooves. 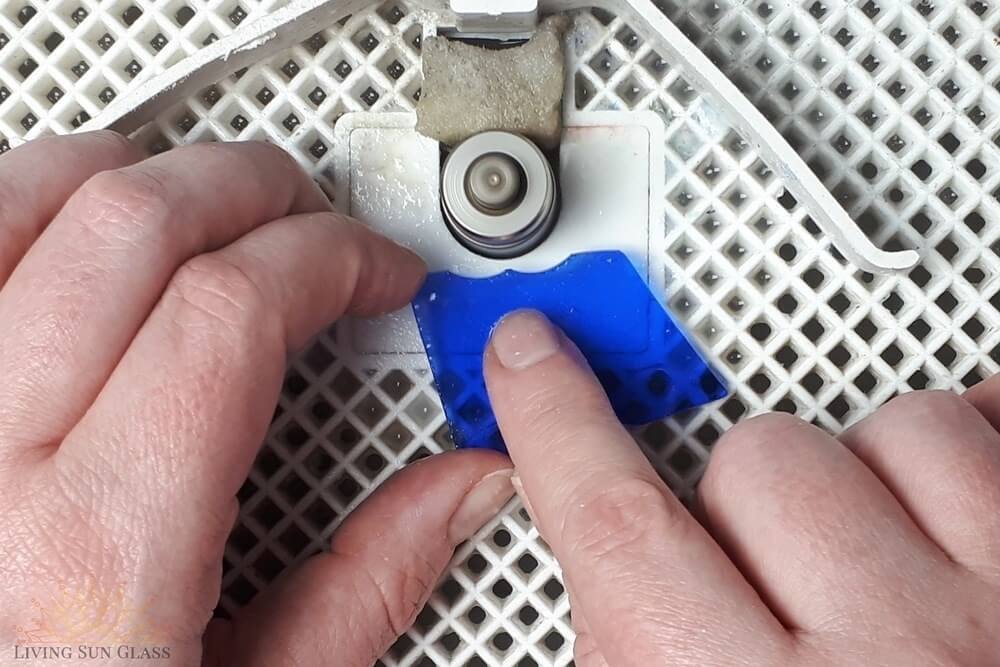 ​​Now, let’s pretend the little peak is a bump that we accidentally created while cutting the glass. Try to grind it off without changing the depth of the grooves you made. 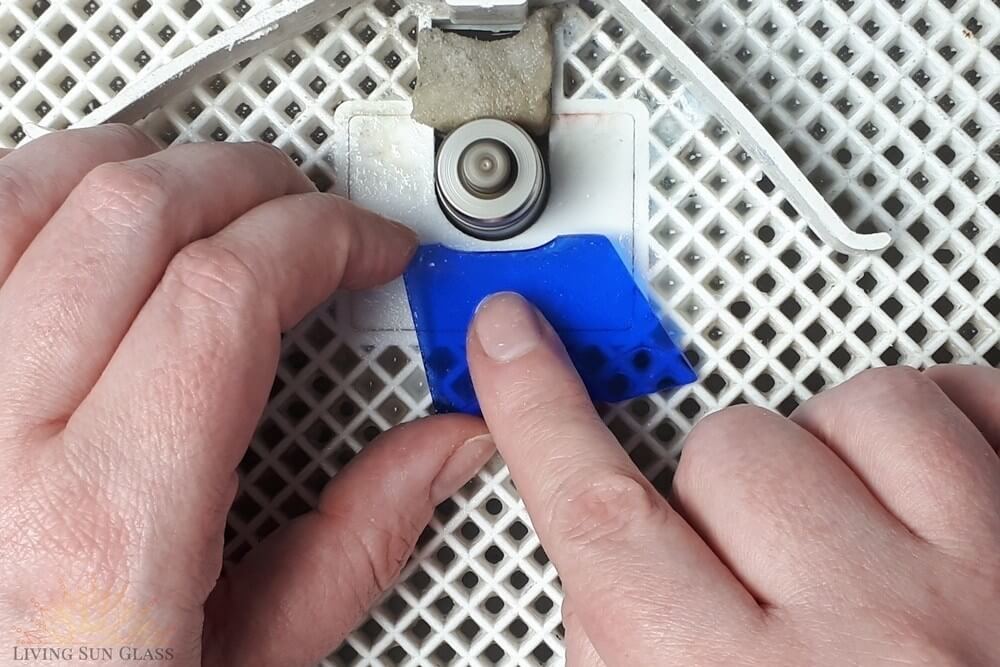 ​By focusing our attention on just that little bump, we can make a flat bottom inside the groove. This should prove to be a helpful approach to bumps on your real projects.

​How close should your cutting be, before saying "I'll take care of the rest on the grinder?"

As with getting a good fit between your pieces before foiling, everyone’s tolerance for accuracy in cutting is different. Push to learn more (always) and learn to accept where you are on your stained glass journey. The​ only destination to reach, is improvement!

You’ll always find that no matter how much you know, there are volumes more waiting for you to discover.

In my opinion, glass grinders are an amazingly useful tool, and honestly, I wouldn’t ever want to create stained glass without one.

Keep in mind that if you find it challenging to make time for your creative projects as it is, using the grinder as a crutch instead of perfecting your cutting skills, can really take up what little time you do get to spend on your hobby.​ Food for thought.

Loved this? Spread the word

Samantha's a passionate creative with varied artistic interests which she loves to incorporate into her glasswork. Working in both stained glass and fused glass, her goal is to help you be creative and think outside the box while teaching skills to make glass crafting easier.

Strip Cutter: Do You Really Need One to Cut Glass Into Perfect Strips?

How to Cut Glass: Getting the Right Pressure

After teaching hundreds of students in person, basic skills course were created and added to this site. These courses address all of the questions that are common for beginners and hobbyists making stained glass at home.

Check Out the Courses Now