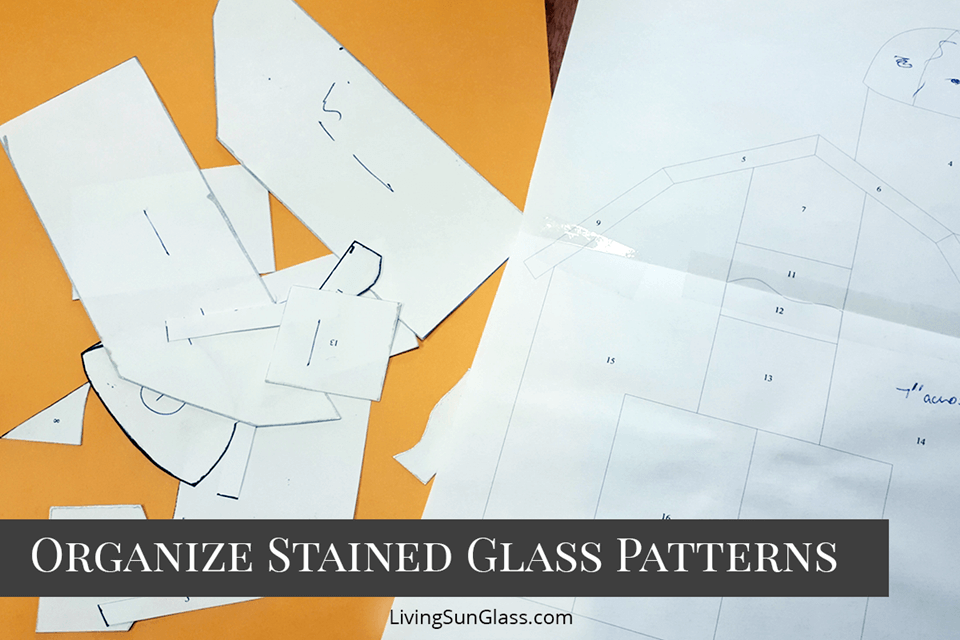 ​Stained glass hobbyists and professionals​ learn many skills to make stained glass. Yet, organization is the one area that is often overlooked​. Specifically, the organization of patterns.

​Have you been at stained glass for a while? Then you’ll know the struggle and the limitless number of questions that storing patterns brings up.

​You have stockpiles of great patterns. You just need to organize them somehow. Deciding what to do with the used patterns that ​are a bit icky is hard. ​​How should one store the cut up pattern pieces?

​When I started, I had a tendency to stack the used patterns on the corner of my workbench.

Making a pile was the quickest and easiest way to get the papers out of my way so that I could move on and start my next stained glass project.

Being creative means we​ do the artistic things with passion. Cleanup and organization ​easily take a back seat and ​get put off until later.

​What Often Happens With Patterns

Let me set the scene for you:

There you are. You’ve finished your project and your excitement levels soar. Look at that beautiful suncatcher!

You decide if it’s a gift or something to keep for yourself and put the finished piece away accordingly.

​You're not even done tidying up from your project and you’re dreaming about which lovely little ​design you’ll do next! ​

So,what do you with the pattern from your last project?

If you cut and trace your pattern pieces on paper, what do you do with the paper cut outs? Throwing them away doesn’t seem too practical.  what if you want to make this design again?

This is where many of us take the path of least resistance, which for me was to start a pile. There really isn’t any harm right? It’s just an innocent little pile with a couple of patterns....when it starts.

The pattern pile grows and grows and grows. And the stack becomes that thing that haunts you as get bigger and taller. Occasionally cut pattern pieces slip out of the pile and you have absolutely no idea where it belongs. ​So you rummage ​in frustration.

It didn't take long for me to discover that this was really not an efficient way to store patterns.

​How I organize My Patterns Now

​ The first thing I did was purchase a couple of very large binders and a box of brown envelopes that fit 8.5 by 11 inch paper. Using a 3 hole punch, I punched holes down the left side of each envelope. This​ made it so that the opening for the envelope would be at the top once placed in the binder.

I traced suncatcher designs ​​onto the envelopes. Then, stuffed all of full size ​paper printouts along with all the ​cut​ pattern pieces ​inside. This method also meant that when a new copy of the pattern was needed, photocopying the front of the envelope was an easy task. ​

​This process was continued until all of my suncatcher patterns were in envelopes. ​For designs that I was making over and over again, I ​made a notation. This way it was easy to identify which pattern it was in case no template ​had been drawn onto the envelope. Then, the envelopes were sorted into the binders in alphabetical order.

​
Larger patterns for panels or large windows needed their own separate system to organize them. Personally, I​ still struggle with this. To keep them rolled up and organized, ​​I ​roll the pattern paper ​tight and use a piece of tape or elastic band ​to ​hold them. ​The name of the pattern or customer that the pattern was used for is written on the outer edges of the roll. Then, the rolled pattern is ​stood in a box with other similar patterns and either left in a standing position, or tipped on its side to fit into a shelving unit.

In the process of explaining how I organize my patterns, I was curious to see how other people store theirs. ​

​How Others Organize Patterns

​Quite some time ago, I sent an email to my readers asking them if they would like to share how they store their patterns.  ​Here are just a few of their responses​:

​What's the Best Way to Organize?

​In the end, ​crafters store their patterns in a fashion that's ​makes sense for them. ​Be it in a filing cabinet, in binders, digital files on the computer, using plastic bags or folding large patterns to hang using pant hangers in a closet, as long as you're sorting them and keeping all the pieces together, and the storage solution works for you and your space, you're on the right track to saving yourself endless headaches.

When Copper Foil Won’t Stick To Your Stained Glass

marlin75@icloud.com Very timely and helpful article as I’ve been trying to figure out with all my patterns and how to organize them in a way that makes sense. I really like your binder solution and I’m going to switch that. Although still need a solution for my larger patterns that won’t fit into the 3 ring binder. Thanks! Mark

I use the clear sheet protectors for all my patterns. You can easily see the pattern, the cut out pieces can be stored in the plastic sleeve along with the pattern. No hole punching needed and you can even put 2 patterns in each sleeve…double sided so when you turn the page the other pattern is on the other side. Saves space. I have on occasion put several similar patterns in one sleeve. For example when I was looking for a unicorn pattern I printed off several different patterns. I put them all in one sleeve and noted on the cover that there were several patterns. I have several binders to try to keep the “like” ones grouped together. eg Christmas, birds, flowers, etc.

This is a great way to store them, Linda. I was actually using the sleeve protectors earlier on but was having problems with losing some pieces as I would often pick it up the wrong way (upside down.) That’s when I settled on the envelope system. The plastic sleeves certainly makes things much easier to see! Thanks for sharing.

I too use a binder for small patterns. May I suggest on larger patterns. Roll them but use rings cut from paper towels or toilet paper. I was having trouble with tape tearing my pattern and rubberbands sometimes got old and crumbled. Once rolled and secured I place numbers on the rings and I have a numerical list inside the lid of my tote.

I love the idea and will try using a binder with clear/see through pockets for smaller patterns. For larger patterns I use empty paper towel and wrapping paper rolls. I make 3 copies of the pattern and mark one as the master copy. I can then roll any cut pattern pieces with the full size patterns and place it all in an appropriate roll. The rolls are labeled with the pattern name, size and # of pieces. Then the rolls are stored alphabetically by letter or subject. By using the rolls the patterns are protected and I don’t need to keep track of elastic/rubber ties or bands that get misplaced, dry out or, break.

A Good Fit for Stained Glass: How Close Should the Pieces Be?33K Total Shares